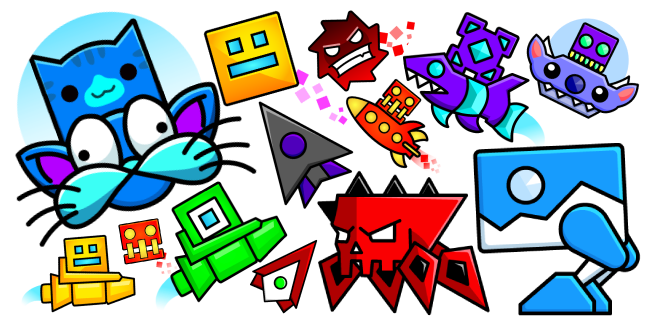 Geometry Dash is a runner-style music platforming game Swedish developer Robert Topala aka RobTop. It was released for iOS and Android in 2013, and for Steam in 2014. The game has different versions. For example, a lite version that is available on mobile devices has a feature such as free expansions. Geometry Dash Meltdown, Geometry Dash World, and Geometry Dash SubZero include exclusive levels.

In the beginning, the player takes the form of different things such as a cube, a ball, or a UFO. Some of them you already can find in our Geometry Dash Cursor Collection. Then, using one-touch gameplay, the player must try to go through a series of interactive obstacles, movement-shifting transporters, and behavior-manipulating portals to get to the end of levels without crashing, listening to exciting music all his way through the game.