Among Us cursor collection 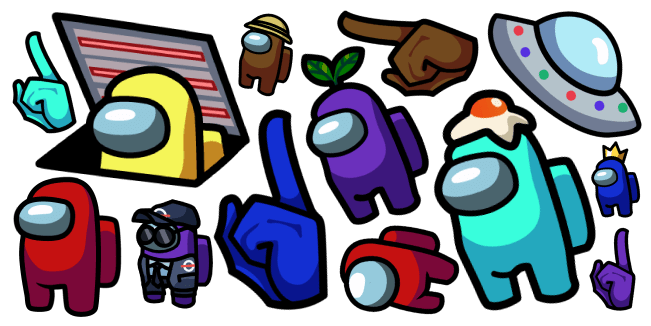 Among Us is a multiplayer social deduction online-game from the American company InnerSloth. The game was released in 2018 but didn’t receive much publicity, but in 2020, thanks to Twitch and YouTube, the Among Us gained great popularity.

This hit of the season is perfect for playing with friends of 5 to 10 people. In a 2D arcade game, players must try to repair their spaceship, which is returning home from a dangerous interstellar trip, but not everything is so simple because part of the team is infected with alien parasites. Because of this, characters are divided into two types: teammates and impostors. The Impostor’s goal is to hide from being disclosed, sabotage the ship, hide and move through the vents, cheat and frame others to kill the crew before the ship returns home. The goal of crew members is to find the impostors. While everyone is repairing the ship, no one can speak to save anonymity.

The characters are shown as small humanoids without arms with little legs in a spacesuit. These humanoids look the same, so each player wants to look different. They can do this using the name, color of the character, or using additional features such as hats, skins, and pets.

Our Among Us cursor collection is dedicated to fans of this cool game who love Among Us so much that they want to see these little humanoids every day, even instead of their mouse cursor! We have cursors that, just like in the original game, have a variety of colors, skins, hats, and pets. Among the collection you can find Blue Character in Brain Slug hat, Red Character with Mini Crewmate, Impostor in Vent, cursor Among Us Brown Character in Straw Hat, Blue Character in Crown custom cursor, Character an Egg Hat from Among Us and so one! Choose your favorite custom cursor Among Us for a mouse, enjoy it and be sure to win, whoever you are!

Among Us cursor collection