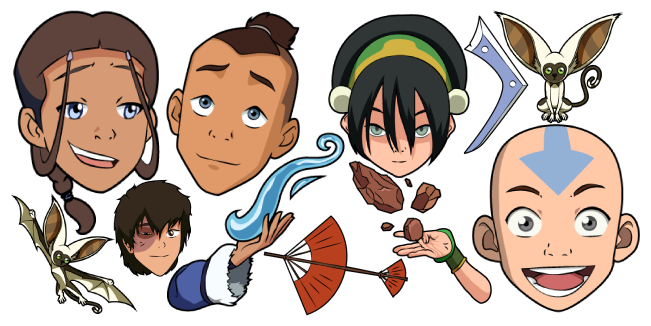 Avatar: The Last Airbender or Avatar: The Legend of Aang is legendary animated series by Michael Dante DiMartino and Bryan Konietzko, influenced by anime and aired on Nickelodeon for a few years, but still remains very popular among kids and even some grown-ups.

Inspired by real Asian places and culture, the series tells us about the fiction world with four nations of classical elements - water, earth, fire, or air, they are also called bending. Magicians, who control these elements call benders. There are a lot of battle scenes during the three seasons, and all of them were inspired by real Chinese martial arts. The plot is centered around the young boy Aang, who is the last survivor of the Air Nomads nation and is the current Avatar, his adventures, and friends, who are accompanying him all the time. All of them you can see in Avatar: The Last Airbender cursor collection.

If you are a big fan of this animated legend, then our Avatar: The Last Airbender cursor collection will be a pleasant present for you. Here you can find all your favorite characters as fanart cursors. There are Aang as Avatar cursor, Momo cartoon cursor, pointer with Katara, Sokka as cartoon cursor, cursor with Avatar: The Last Airbender Appa, Toph cursor, Zuko pointer, cursor with Iroh, and more than you can imagine.