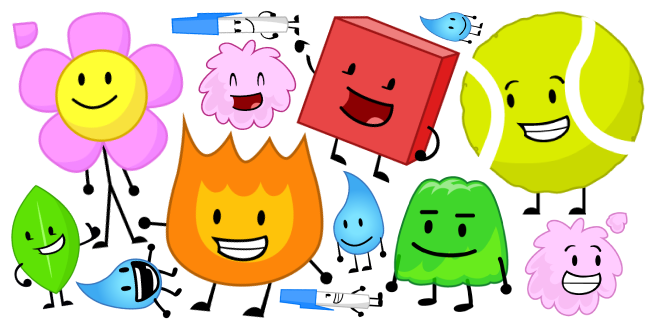 Battle for Dream Island is an American animated reality TV show created by Cary Huang and Michael Huang, who became famous for their YouTube channel jacknjellify, where they post this viewer-voting web series. Besides web episodes, the series has expanded into web shorts, web games, and merchandise. Each episode comes out once a month, and the further, the more interesting and each new episode gets crazier than before, and everyone guesses who will end up winning the big prize!

The idea of the show is pretty simple - there’s an island and twenty objects, each of them wants the island for themselves. But only one can get it. Who is it? The teardrop or the ice cube? The sponge or maybe the flower? Well, there’s only one way to solve this problem…

And this solution is Battle for Dream Island Cursor Collection! You can decide on your own who will be the winner by adding your favorite one as a cursor. Will it be a cartoon pointer with Teardrop or BfDI cursor with Four? Or maybe Leafy cursor? Or you are a fan of cartoon cursor with BfDI Blocky or pointer with Tennis Ball? Come and get your hero!