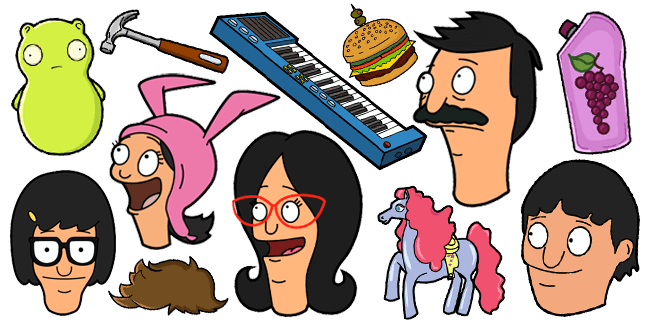 Bob’s Burgers is a well-known animated sitcom that was first aired in 2011 by Fox. Show Bob’s Burgers introduces us to the Belcher family, married couple Bob and Linda, and their children Tina, Gene, and Louise. Belcher family runs a small burger restaurant called Bob’s Burgers in a place called Seymour’s Bay. Bob’s Burgers is located in a green two-story building with Belchers apartment on second floor. The restaurant is squeezed between two other buildings with businesses, one of them is “It’s Your Funeral Home and Crematorium” and the second, as joke from creators, changed every week in the opening credits.
Business is not an easy task and Bob’s restaurant is also struggling to stay open. Bob does not intend to give up, he is very optimistic and believes that in the near future everything will be much better. Maybe it would be so if it were not for his hysterical wife Linda, who cannot imagine her life without scandals, and three unbearable kids: Tina, Louise and Jean. Each of them constantly gets into different stories and it is impossible to get out of them without the help of Bob. Because of this, he cannot concentrate on his business.
We want to share with you the adventures of Belchers and Bob’s Burgers with a collection of Bob’s Burgers cursors. Choose a series character you like and play with him as a cursor. Would it be Bob Belcher cursor or his wife Linda Belcher cursor, their older daughter Tina Ruth Belcher cursor, their son Eugene “Gene” Belcher cursor, their youngest daughter Louise Belcher, or some of your favorite other character of the show like Linda’s friend Gretchen cursor.