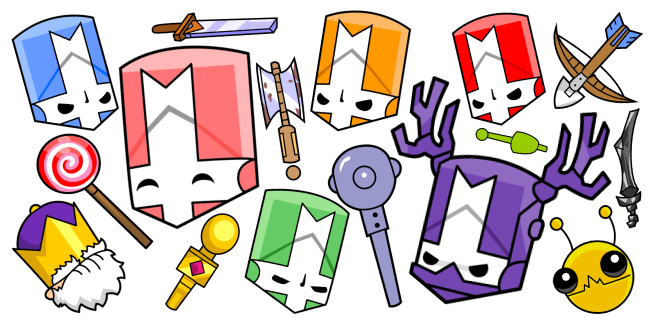 Castle Crashers is a 2D side-scrolling hack-and-slash video game developed by The Behemoth. It features music created by members of Newgrounds.

The game set is in a fictional medieval universe in which a dark wizard steals a mystical crystal and captures four princesses. Four knights are charged by the king to rescue the princesses, recover the crystal, and bring the wizard to justice. You can find all of them in our fanart Castle Crashers cursor collection.

This game incorporates a small number of role-playing video game elements. After selecting a character, the player has to choose a starting stage through an overworld map. After completing a stage, the player can revisit it or move to another scene. The map also displays shops where the player character is allowed to buy items and weapons using coins gained from defeated foes, bosses, and chests. Arena locations can be unlocked where the player character can take on challenges to unlock additional characters like the villager or someone else.