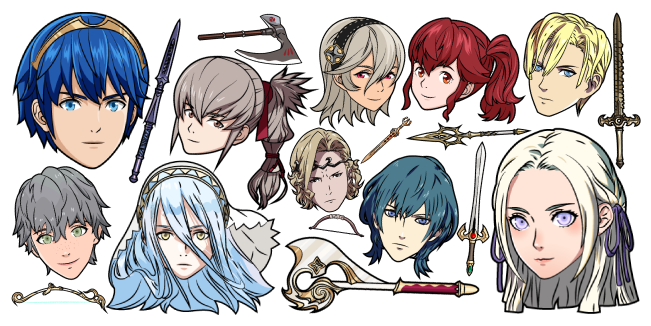 We know that you like this game very much. Fire Emblem was released in 1990 by Famicom as a fantasy tactical role-playing game franchise, which later was also developed by Intelligent Systems and published by Nintendo. Gameplay is pretty clear and going around the tactical movement of characters across grid-based environments, while incorporating a story and characters, which are similar to traditional role-playing video games.

Byleth is the central hero of Fire Emblem and is an Avatar character. You can choose the name and gender of this character on your own. By the way, you can already find Byleth in our Fire Emblem cursor collection with other heroes of this fascinating game.

If you are a big player of this RPG and know every character and each sword of this game, then welcome to the world, where they can be your fanart game cursors all the time. Among them already are Corrin and Sword Yato cursor, game pointer with Takumi and Fujin Yumi, Fire Emblem cursor with Alfonse and Sword, pointer Marth and Sword, cursor pack with fanart Xander and Siegfried Sword game cursor, game pointer with Ashe and Bow, Fire Emblem game cursor with Edelgard and Axe, cursor with Anna, and much more are still coming.