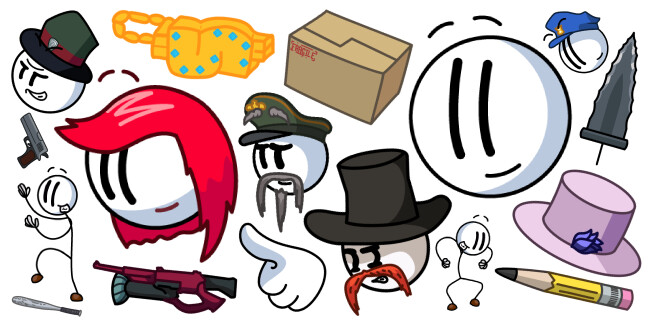 The collection of games about Henry Stickmin includes all the stories, events, and adventures that this man got into.

Who didn’t know, Henry Stickmin, represented as the game cursor with Henry Stickmin and Magic Pencil, is the main character of games who started out as an insignificant thief out of a desire to make quick cash. However, he escapes from the West Mesa Penitentiary thanks to Dave, who is depicted as Henry Stickmin cursor named Dave Panpa and Box, after which Henry becomes a well-known criminal for stealing the Tunisian Diamond. Then he is approached by the government, which offers to drop all charges if Henry helps destroy the Toppat Clan with their leader Reginald Copperbottom cursor, and his assistant Right Hand Man and Metal Baseball Bat mouse cursor.

Sometime later, Henry Stickmin again finds himself on an adventure, only now he is imprisoned in The Wall complex until he manages to escape himself either with the help of another prisoner Ellie from Henry Stickmin mouse cursor with Ellie Rose or with the help of his friend in the form of Charles Calvin cursor. After escaping, Henry gets a new goal, depending on the player - to help or defeat the Toppat Clan, who plans to seize the gems at the space station and never be found using a rocket, freely invading any place on Earth and not worrying about governments.