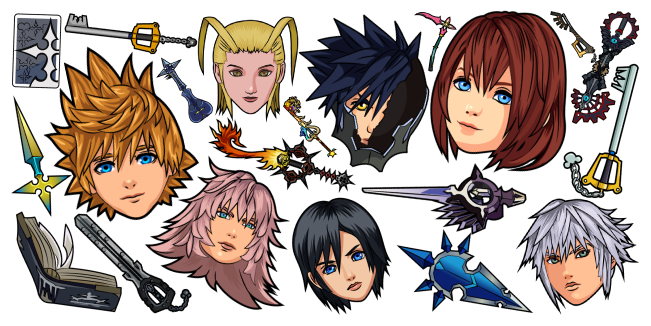 We bet you have heard of this beautiful game. Kingdom Hearts is a crossover between Final Fantasy and Disney properties, developed and published by Square Enix as an action role-playing game series. Though the series features locations unique to the Kingdom Hearts franchise, worlds from Disney films are also heavily explored there. For example, the main protagonist has to interact with popular Disney characters to protect them from enemies.

The game goes around Sora, who is a Keyblade wielder from the Destiny Islands. From early childhood, he and his childhood friends Riku and Kairi have been dreaming of taking an adventure to find out what lies beyond their usual life in their home. Sora is the original persona of his own Heartless and Roxas, the source of Xion’s memories, and the carrier of Ventus’ heart.

Are you a huge fan of this RPG and can’t get enough of this? Then we have great news for you - fanart Kingdom Hearts cursor collection. There you can find a cursor pack with fanart Kairi, Kingdom Hearts cursor Sora, game cursor with Ventus, Larxene and Foudre game pointer, cursor with Xion and Kingdom Key, Demyx game cursor, pointer with Riku with Braveheart, Luxord and Game Card game cursor, Zexion fanart cursor, Lea game pointer, fanart Vexen cursor pack, cursor Marluxia and Scythe game pointer, but that’s not the end - other will be soon too.