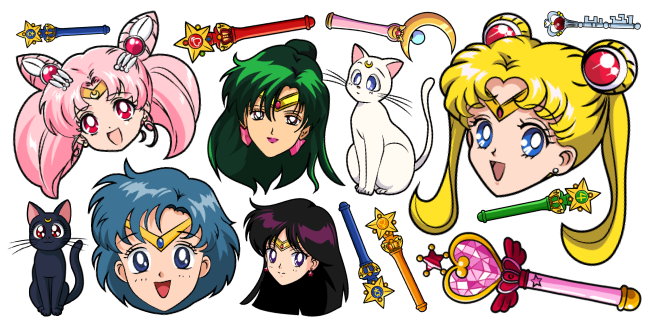 Sailor Moon is one of the most legendary anime, based on the shojo manga which was written and illustrated by Naoko Takeuchi and published in Kodansha’s Nakayoshi magazine in the 90s. But this series became so popular, that nowadays it is a huge franchise with movies, series, live-action television, games, musicals, novels, park attractions, and even ice skating shows.

What is this Sailor Moon about? It is a magical action series full of adventures of a teenage girl who learns about her destiny as the legendary warrior named Sailor Moon which you already can find in our Sailor Moon Cursor Collection. But she doesn’t pass this way alone, she has friends - other Sailor Scouts who defend the Earth and Galaxy.

If you like this anime as much, as we do, then you are greatly welcomed in our fanart Sailor Moon Cursor Collection. Here you can find your favorite characters as anime cursors. Your pretty guardians are waiting for you! Among them is Sailor Jupiter as a cursor, anime pointer with Sailor Pluto, Sailor Saturn cursor, Sailor Moon cursor with Sailor Venus or Sailor Mars, or even anime cursor with little Sailor Chibi Moon. And many others characters from the anime about Pretty Soldier Sailor Moon.