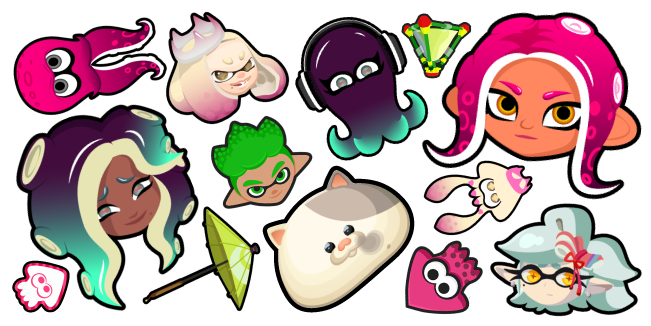 Splatoon is a popular multiplayer third-person shooter game developed and published by Nintendo. Splatoon is eight players which are divided into two teams, fighting over territory and painting the arena the same team color.

Splatoon players take on the role of an unusual human squid called the Inklings, who need to paint as much space as possible with their team’s color. That is why the players are armed not with guns and pistols, but with ink-filled balloons, brushes, paint guns, and the like.

In human form, Inklings can shoot ink as well as splat their enemies. Transforming into a squid allows the player to swim in ink of their color, slide through gratings, climb walls, hide from opponents, and replenish ink supplies. If you are in the enemy ink, your movement speed is reduced and the damage is dealt. These incredible Inklings can be in the form of a game cursor for a mouse Splatoon 2 Pearl, Splatoon cursor with Marina Ida, Splatoon 2 Callie cursor for a mouse, Splatoon 2 cursor with Judd.