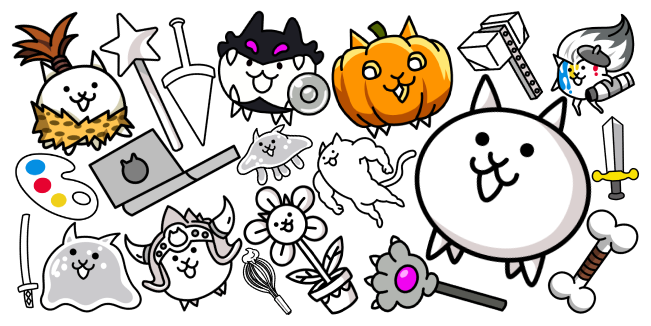 The Battle Cats is a free-to-play tower defense video game by PONOS Corporation for iOS and Android, which was initially released in Japan under the name Nyanko Great War. It received immense popularity in Japan and Korea.

The Battle Cats is a game where the player selects a team of in-game unlockable cats with different stat amounts to defeat enemies to protect their base. The gameplay involves sending a broad roster of cats onto a 2D battlefield to defend the Cat Base.

The game story is told through screens of scrolling text, usually appearing at the beginning and end of each part. For example, the story of Empire of Cats consists of an army of Battle Cats appearing amidst the world’s varying crises. The identity of the creator of these Battle Cats is the fictional deity The Cat God, which can be unlocked as a power-up early into the story, and beating chapter two of Cats Of The Cosmos opens it as a unit. The cats then proceed to take over the world, harnessing the world’s power.

Whether you enjoy playing this fascinating game and want to collect all of these funny cats, you are on the right side - the side of our The Battle Cats cursor collection. Here you can find fanart The Battle Cats Superfeline cursor pack, cursor with Cat O’Lantern and Pumpcat, Knight Cat pointer, fanart Nerd Cat game cursor, Samurai Cat game pointer, and many other Battle Cats cursors.